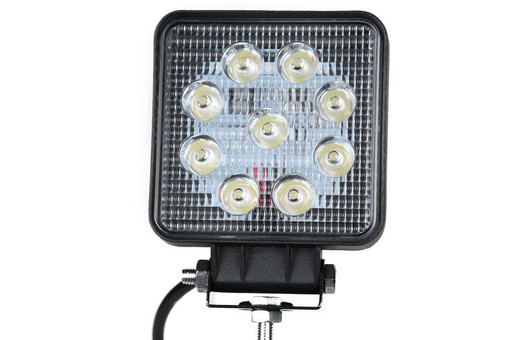 While the Impact 9 Square Spotlight is exactly the same specification as the Impact 9 Round, the obvious difference is the shape. ETD always gives its customers as many choices as possible so they can buy ‘the perfect light’ because sometimes ‘shape’ matters for a better fit. The ‘9’ has 9 Generation IV 3-Watt CREE LEDs with a highly engineered polycarbonate lens that bends the light into a high-intensity 30° focal point. All the lights of the Impact Series come pre-wired with a 10’ power cord, and all have adjustable, stainless steel brackets to position ‘the spot’ right where you want it. The housing is made of tough, die-cast aluminum and is sealed tight meeting the stringent IP-67 Rating. Worried about it draining the battery? It won’t because it runs on 10-30 volts. This light produces 27 Watts which equates to 1620 lumens. (That’s the amount of light the eye sees.)

We were all raised thinking in Watts, but LEDs are measured in Lumens. ETD understand that ‘Watts’ are comfortable, and it’s hard to give them up, so we still list ‘Watts’ when measuring the light output, but actually Watts measure not only light, but heat as well. LEDs produce very, very little ‘heat’ compared to a traditional incandescent bulb.