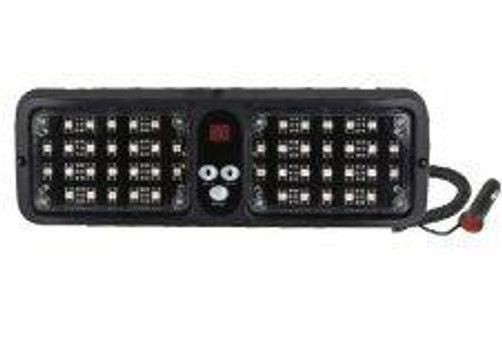 The STINGER SMD Visor Light is constructed with LED chips instead of LED bulbs. The Surface Mount Device (in this case, a tiny chip just 5mm square) is soldered onto a printed circuit board using Surface Mount Technology rather than plugging it in like standard LEDs.

The visor light has 48 SMDs which produce over 1000 lumens of high-intensity light; it has 12 flash patterns with pattern memory, and comes in 5 solid or 7 split-color combinations. The easy-to-reach flash pattern and UP/DOWN controls are located in the center of the visor. The display showing the number of the flash pattern in use is an additional feature on STINGER Visor Lights. The ON/OFF switch is on the head of the cigarette lighter power plug in; it comes with a 9’ expandable power cord. The housing is constructed of high-tech polycarbonate which is virtually indestructible, impact and scratch resistant. The lens, too, is made of polycarbonate which is as transparent as the purest glass. The STINGER SMD Visor light is attached to the visor with straps and remains completely out of sight until the visor is flipped down; it is the perfect stealth option when considering emergency led lights!

SMDs have high reliability and performance, and are being used in numerous industries beyond the automotive because they can be soldered on tapes and strips giving them a wide range of uses and applications. SMDs have a lifespan of 100,000 hours, stay cool, and don’t break easily. SMDs are classified by their size; the STINGER Visor uses 5050 SMDs which means they are 5.0mm x 5.0mm square. The SMD LED is very new to the market, but already it has a firm place in the lighting industry.