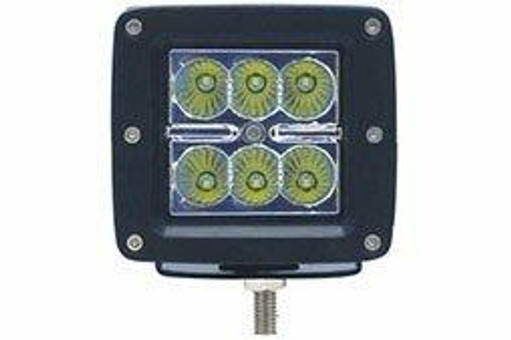 The Velocity 6 ‘Spot’ is the big brother of the ‘4’; it has 6 Generation IV 3-Watt LEDs, and it shines longer and stronger with 1080 intensely bright lumens. Highly engineered reflectors and lenses create a phenomenal spotlight that illuminates objects right in front of you well in advance; the stainless steel bracket is adjustable. Because it’s just a little over 3” square, the little light can be mounted just about anywhere on your Off Road vehicle, high or low, front or back. A die-cast aluminum housing protects the LEDs from flying debris and rocks as does the shatter-proof, polycarbonate lens. With its IP-67 rating, you never have to worry about dust or dirt getting into the light no matter how rugged the terrain is; it’s sealed tight and resists moisture up to 1 meter of submersion. It runs on 10-30 Volts, so is easy on the battery, and with CREE LEDs, it lasts 30,000 hours. That’s a lot of FUN!

The ‘6’ like almost every OFF ROAD and Emergency Light sold by ETD, has CREE LEDs, some of the highest quality LEDs in the industry. Year after year, the global Research and Development Departments announce one major breakthrough after another in numerous applications of LEDs across multiple industries. CREE is constantly breaking its own records; it was announced in March, 2014 that they had broken yet another barrier by creating a 1 Watt LED that produced 303 lumens of unbelievably bright, white light in the lab! ETD and CREE...We Go Together!