A Lumen (lm) is the unit measuring the total amount of light emitted from a light source that the human eye can see. 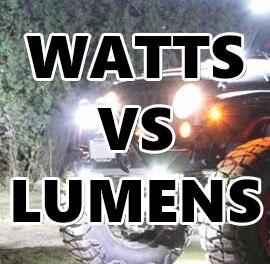 CFL and LED lights have begun to flood the market replacing traditional incandescent bulbs in homes, offices, and traffic lights, in manufactured goods and electronic components because Compact Fluorescent Lamps and Light Emitting Diodes are long lasting, low heat, environmentally friendly, cost effective lasting years instead of months, and most of all, produce a Lot of Light for the money. These lights are totally different from the bulbs we have used since Edison’s invention, and these ‘new types’ are measured in LUMENS. So, now we must begin the process of ‘thinking in lumens’ instead of in watts, and it’s time to start thinking about lumens as well. But why should Americans give up the Watt and….Go Lumen?

Since the ‘New” lights are measured in lumens and more and more LED and CFL products are available in the marketplace, the lumen count has started to appear on packaging. Are you one of the many ‘baffled’ who stand before a long row of bulbs wondering what to buy and spending more and more time reading light bulb labels and still not understanding the lumen-watt connection?

All lights can be measured in lumens, but Edison bulbs (incandescent) are measured in WATTS and that’s what the public was brought up on. We are ‘used to’ thinking in watts and have a sort of ‘built in’ light meter, so we know approximately how bright the light a 15 watt bulb ‘looks’ compared to a 60 watt bulb. We also know that the higher the wattage, the hotter the bulb because with more light comes more heat.

There are basically 3 types of lighting options that are the most common: Edison bulbs, LEDs, and CFLs. HOW MANY WATTS does it take to produce the SAME AMOUNT OF LUMENS (the light we actually see) from each of the 3 most common light sources?

How many Watts for the same amount of Light (Lumens)?

Notice when compared to an Edison bulb, the CFL uses 27 Watts less, but produces the same amount of light, while the LED saves 35 Watts. That’s good because less Watts means lower electric bills.

Do you know that about 90% of the energy used by a standard Edison bulb is converted to HEAT...not LIGHT! A watt is the amount of electricity a light bulb uses to produce light; it’s not a measurement of the brightness of that light. Watt = Light Energy + Heat Energy....and we buy it in kilowatts (a 1000 watts at a time). When we pay our electric bills, seldom do we think of how much ‘heat’ we’ve bought.

When our electric bills are high in summer, we always ‘turn up the thermostat on the AC’ and ‘make sure to turn off the lights.’ That has been about the extent of our thoughts on the consumption of electricity, that is….until now. With the advent of LEDs and CFLs, we don’t have to waste energy any more because it’s easy to use all the light we want, save money, and conserve energy, too!

Let’s look at this another way. How much LIGHT do we get when we buy 1 kilowatt from the Electric Company from each type of light source?

HOW MUCH LIGHT YOU BUY

We can see clearly that when we buy a kilowatt of energy, we get a whole lot more light from the ‘new’ lights. Research & Development teams of major manufacturers like CREE, GE, and Westinghouse are constantly introducing new and better light sources that create brighter, more efficient light using less ‘watts.’ In fact, CREE announced on March 26, 2014 that it had broken the barrier in its laboratory by creating an LED that produced 303 Lumens/Watt. That’s a WIN-WIN!....Well, maybe not for electric companies.

In our ‘traditional’ minds, a 5 Watt bulb seems like a very dim light; that’s true if it’s an Edison bulb because only about 10% of it would be light energy. It would barely light up a small refrigerator, but a 5 watt LED is totally different because it’s Almost ALL LIGHT compared to incandescent bulbs. LEDs don’t produce much heat and are cool to the touch. REMEMBER: You don’t want to pay for HEAT unless you’re cold or cooking.

Below is a chart that lists the familiar wattages of Incandescent Bulbs. Compare how many Watts are needed by each type of light to achieve the same amount of Light Output. You’ll see why LEDs and CFLs are taking over the emergency vehicle lighting market, alongside many others. You use fewer watts for the same amount of light, and watts are what you pay for.

(There is a range for LEDs and CFLs because temperature slightly affects wattage.)

“Thinking in Lumens” is a whole new way to think about how to buy LIGHT. We are now selecting products by Light Output. Keep the chart in mind. If you had a 100W Edison, and want to replace it with a low heat LED or CFL that has the same amount of light, then you’d want one with 1,600 lms….a 60 watt incandescent is 800 lms, so you’d select a LED with 6-8 watts or a CFL with 13-15 watts. Or if you want the same amount of light as a 150 Watt incandescent bulb, and you want it to last for years (because the light is hard to reach), then purchase a 30-55 Watt CFL which is long lasting and equals 2,600 lms.

Don’t think about Wattage anymore because Watts don’t measure brightness of a light; it measures heat and light energy, so using ‘Watts’ isn’t really a valid measurement for the Light Output of LEDs and CFLs.

Watts and Lumens don’t even measure the same things. And worst of all, if you still focus on ‘Watts’ when buying a LED or CFL, you’ll most probably buy way too much light for your needs. Imagine buying a 60 watt LED light to replace a 60 watt incandescent light in a bathroom. That’s 3,600 lms instead of the 800 lms previously used. With that much eye-squinting light, it would be difficult to open your eyes to put on makeup, let alone shave!

New technology and new products create the need for new terminology, and while the word ‘LUMEN’ popped up in the late 19th Century when scientists began to experiment with electricity and light, it hasn’t been part of our daily language, not until now. Today, the word has become commonplace; it’s on every package containing a lighting device. Abandoning the ‘Watt’ is difficult because it is not just replacing a word, it is changing a mindset in order to make room for a new way of thinking about light, so a person can buy something as mundane as a ‘light bulb.’ An entirely new, rapidly expanding industry, with thousands of its never-seen-before products is embodied in this one word...Lumen.

~ written by K. A Huffman