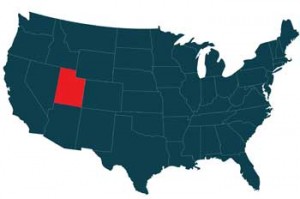 The Utah State Legislature has implemented various lighting requirements and restrictions for emergency and maintenance vehicles. All vehicle illumination and safety equipment is subject to approval under emergency vehicle light laws enforced through Title 41, Chapter 6a and Utah Department of Motor Vehicles. The vehicles of topic include the following:

One should know that law enforcement vehicles must adhere to specific rules similar to others, although some general rules do not apply. A general law, stated under section 1616 is that a vehicle lights displaying a red light must not be visible from the front center of the vehicle. However authorized vehicles, including police vehicles, are exempt. Additionally, police cars reserve the right to have blue flashing police lights and rotating lights.

Police cars are also exempt from section 1610, which state that limit the number of spot lights allowed and the law that high intensity spot lights should refrain from shining on mirrors, windows and windshields of other vehicles.

Additional laws exist in which police vehicles are not except. For example, if the vehicle should emit light with a candlepower over 300 intensity, it should not illuminate past 75 feet from the vehicle. Also, if the intensity is 300 or higher, there should not be more than four lights.

Fire trucks are listed as authorized vehicles along with police cars and are subject to similar codes and restrictions as police cars. As stated under section 1616, lights with 300 plus candlepower intensity should not shine beyond 75 feet. Furthermore, the fire truck would have to display less than four lights when they are 300 or more candlepower.
Fire trucks, like police vehicles, are exempt from the law prohibits vehicles from displaying a red light front and center.

Both fire trucks and police vehicles are exempt from laws that restrict the number of and illumination of spot lights, as stated in section 1610.

However, they are not exempt from the law that prohibits the visibility of blue lights from the immediate front and center of the vehicle, and as such need to pay attention to the color of fire truck lights that are being used.

As a note, volunteer fire fighter lights would then be subject to the same laws as fire truck lights. These laws are listed above in the previous section.

All variations of ambulance vehicles, whether private or public, must be licensed through Title 26, chapter 8a by the Utah Department of Health Bureau of Emergency Medical Services. The license permits an ambulance to response to both emergency and non-emergency situations. There are additional requirements that are as follows:

The Utah State legislature has not yet implemented specific lighting rules designated solely for construction and maintenance vehicles, as stated in section 1617 of Title 41, chapter 6a. The laws will be adopted in accord with Title 63G of the "Utah Administrative Rulemaking Act," and they are predicted to align with the "Manual on Uniform Traffic Control Devices for Streets and Highways." 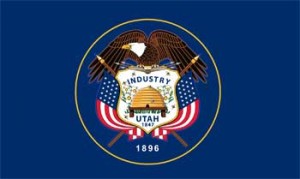 These vehicles are not considered authorized vehicles and are thus subject to other rules and regulations. First, tow trucks, which are considered those that have a "load extending beyond rear," under section 1606, must contain reflectors, flags or display lights at the rear if the load stretch is 4 feet or more beyond the rear of the vehicle.

During daylight, 12 inch square flags are necessary to indicate its extremities in the case that the load goes beyond the sides or 4 feet beyond the rear. The flags must be positioned in the same place where a reflector or lights would otherwise be.

In the absence of light, the vehicles must also contain a red lights on each side, one with "maximum overhang" and two red reflectors that show maximum length.

Pilot vehicles are required by the American Association of Motor Vehicle Administrators in Utah to have one of two types of lighting. The first is an AAMVA approved flashing, rotating or oscillating bar on the top of the vehicle that must remain illuminated during the time the vehicle operates. The bar should have a 360-degree view and not be blocked under any conditions.

They may also utilize AAMVA approved, six-inch diameter minimum, flashing amber lights capable of 60 flashes per minute. These must be located on each side of the "oversize load" sign.

Power trucks, also known as utility vehicles are subject to laws stated under Title 41, Chapter 6a, section 16. These vehicles are not permitted to have blue rotating or flashing lights or any red lights that may be clearly seen from the center, front portion of the vehicle. In addition, spot lights are prohibited.

Like most vehicles are subject to, any lights with 300 or more candlepower should not be visible beyond 75 feet of the vehicle and not more than 4 lights over 300 candlepower.

Security vehicles, often seen policing malls or other businesses, are subject to laws stated under R156-63a-610. To begin, these vehicles, though often resembling police cars, are not entitled to use blue lights of any kind. Acceptable light colors are white, amber and green, and these colors are permitted for both front and rear facing display.

They are also required to meet all guidelines under 41, 6a, 1616 in the event that they travel on a public highway or road. Requirements stated under 1616 are listed in numerous sections above. Typically, the lights can only operate on company grounds unless otherwise permitted.

For more information about what lights may be available to you, we suggest calling your State Highway Patrol office at: 801-965-4518

*Please note that these numbers are what we are currently able to find and the numbers may have changed since this listing.

Disclaimer: The emergency vehicle light state statute guide was created by Extreme Tactical Dynamics as a guide and reference. We make no claim to the accuracy or validity of this guide. This guide was written to the best of our knowledge and has been provided to our customers as a courtesy ONLY! The information in this guide is our interpretation of the law as we have read it. We cannot be held responsible for any errors as this is only our interpretation of the law and the laws are constantly changing. We cannot be held liable or responsible for any errors and recommend that our customers refer to their local authorities to confirm the particular statue that governs their use of emergency vehicle lights.