It’s vital that emergency vehicles are fitted with the most effective warning lights, but which type of lights are the best option? Both Xenon tube and LED Strobe lights have been used as emergency lights in the past, but few people really know the difference between the two.

To help you find the best emergency lights for your vehicle, we’ve made it easy to distinguish between LED strobe and Xenon tube lights. By understanding the differences between the two lighting options, you can ensure that your emergency vehicle lights are reliable, eye-catching and unmistakable.

What are Xenon tube lights?

Sometimes known as a flashtube or flashlamp, a Xenon tube produces very intense, bright white lights for a very short period of time. Once commonly used in camera flashes, the light is capable of having a big impact, even when a relatively small Xenon tube is used.

Comprised of a glass tube filled with Xenon gas, the type of tube light produces light when the gas inside the tube is ionized. When this happens, a high voltage pulse produces the light. As the light appears for very short durations, the repeated triggering of the gas produces a repeated flash of lights.

This is one reason why Xenon tubes are suitable for emergency vehicle lights. When fixed to a police car, for example, the short bursts of light produced by the Xenon gas create the flashing lights we all recognize. While the light produced by a Xenon tube is, of course, white, colored gels can easily create the blue and red colors we associated with emergency vehicles or the yellow lights we routinely see on warning signs.

What are LED strobe lights? 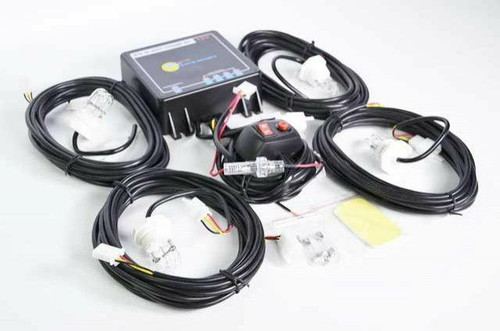 LED strobe lights also produce short bursts of intense light, but they do so via a different light source. LEDs, or light-emitting diodes, rely on electrons producing energy as photons when they reconnect with electron holes in a semiconductor.

The color of the light produced by an LED strobe light is determined by its semiconductor’s energy band gap. By varying this gap, the color emitted by the LED can be changed, which means LED strobe lights can be used to produce the white, red, blue and yellow hues used by the emergency services.

Whilst both Xenon tube and LED strobe lights produce brief flashes of light, the way they produce this light is very different. Due to this, emergency services personnel may find that one type of lighting is more suitable for use on emergency vehicles.

There are advantages associated with Xenon tube lights and LED strobe lights but it’s important to examine these in relation to emergency vehicle lights. To do this, we’ll examine each type of lighting against key factors which are needed in emergency lighting:

As Xenon tube lights rely on gas ionization to work, they require a relatively high voltage. With LED lights, however, a low voltage can be used as no gas is used. Although any light should be handled with care, the use of gas and high voltages means that Xenon lights do require particularly careful handling.

When emergency vehicles need to make people aware of their presence, it’s vital that their lights come on immediately. With police lights, for example, there should be no noticeable delay when the switch is set to on. LED lights are capable of reaching maximum intensity and brightness as soon as they’re switched on, whereas Xenon tube lights can take a little longer to achieve maximum output. Although Xenon lights will turn on straight away, the won’t necessary emit the brightest light as soon as they’re switched on.

As LED lights rely on a semiconductor, as opposed to gas or filaments, they are seen to be more robust than alternative light sources, including Xenon tube lights. Furthermore, the presence of glass in Xenon lights makes them more vulnerable to breakages and damage.

Again, the use of a semiconductor puts LED lights ahead in this respect. With a semiconductor, the flashing pattern of an LED strobe light can be programmed and dimmed as desired. If an officer wants to program different patterns into their police lights, for example, this is easy to achieve with LED lights but not so seamless with Xenon tube lights.

In general, LED lights use around 60% less energy than Xenon tube lights. As organizations come under pressure to switch to more environmentally friendly power options, the reduced amount of energy required to power LED lights makes them an increasingly popular choice.

LED lights can cost a little more than Xenon tube lights when they’re purchased. However, the widespread use of LED lights means that they are reducing in price. Furthermore, the overall cost of running LED and Xenon clearly shows that LED lights are the more cost-effective option. As well as having a lifespan that’s five times longer than Xenon tube lights, LED lights use less energy and require less maintenance, which minimizes running costs in the long-term.

Choosing the best lights for an emergency vehicle

Although Xenon tube lights were once the first-choice lighting option for emergency vehicles, LED strobe lights are now more popular. The increased control and functions, coupled with reduced cost and minimal maintenance, ensure that LED lights are the most suitable lights to use on emergency vehicles or in emergency situations.

Indeed, LED strobe lighting is already being used on emergency vehicles throughout the U.S. and across the world. To find out more about the wide range of emergency vehicle LED lights, take a look at our dedicated range of contact Extreme Tactical Dynamics on 1-888-893-3308.