If you’re planning on kitting out or upgrading your emergency vehicle lights, then you’ll be glad to know that you have plenty of options here at Extreme Tactical Dynamics. We’ve got a range of different options that come in various shapes and sizes, but today, we’re going to be focusing on two of our most popular choices; LED mini light bars and full size LED light bars.

While they serve the same purpose, they come in two drastically different sizes and packages. Though their features are similar, they can be used in entirely different scenarios, often affecting the final purchase decision. 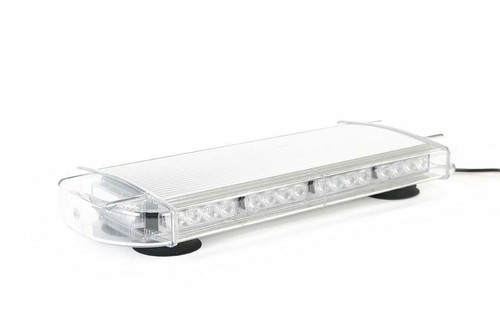 Due to their smaller size, LED mini light bars are typically a lot cheaper but they don’t sacrifice features for the sake of portability. They do, however, sacrifice power as they simply can't hold  as many bright LEDs, that is why you usually will not see them as a police car light bar. A great example is comparing the Mirage 12 TIR LED Mini Light Bar with the larger Mirage 40 TIR Full Size LED Light Bar. As the numbers in the names suggest, there is a stark difference in the number of LEDs in each light bar which ultimately affects the brightness and range. If you’re looking for pure power and brightness, then it’s obvious that you should pick a full size LED light bar with permanent mounts.

But what if you’re not looking for power? What if you’re after features and portability? In that case, smaller LED mini light bars can be a fantastic choice. This is excellent if your vehicle is often used for personal purposes in addition to being an emergency vehicle. In the case of the Mirage 12 and Mirage 40, both emergency vehicle lights offer the same features, such as a LED strobe light function and complete waterproofing. So in terms of features, you’re not missing much.

However, what you do gain with the Mirage 12 is two magnets that hold the light securely to the roof. This is in contrast to the Mirage 40 that uses a permanent roof mounting system, preventing it from being removed without bringing out a tool kit. If you’re someone that uses their own vehicle for emergency service purposes, then you’ll find this isn’t a very practical solution.

With the Mirage 12, you can easily remove the light whenever you’re using it as a civilian vehicle. However, if you’re called and your services are needed in an emergency, then you can quickly take out the light (which might fit conveniently in your glove box) and place it on your roof. This is a fantastic feature and one of the reasons why many part-time or volunteer emergency service operators use a mini light bar instead of a large fixed one.

The price is also a lot lower than a full size light bar. Despite this, you can purchase some pricier mini light bars that offer similar features to larger models, with some even sporting over two dozen LEDs. One of our largest mini light bars, the Tracer 27 TIR, can get incredibly bright thanks to its LED count while still staying portable thanks to the magnetic mounts. This is one of the most popular options in our range thanks to its versatility and overall power.

We have a wide range of different LED mini light bars that focus on portability without sacrificing power, so take a look at our product selection if you’re interested in a light bar that can be removed whenever it’s not in use. 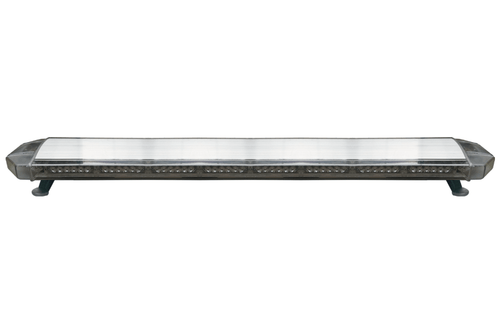 Next, we’ll take a look at our full size LED light bars such as the Mirage 48 and the Tracer 47. These larger light bars are more suited for use as a police led light bar, or even a tow truck light bar.

These light bars are made to be a lot brighter due to their increased LED counts. However, due to their larger size, they’re also installed permanently onto the roof of your emergency vehicle instead of being removable. This makes them undesirable if you use your vehicle for more than just emergency services, so they’re more suited towards professionals that need to be recognized at all times.

For instance, if you’re kitting out a vehicle to be used as part of a local police force or emergency services team, then a full size LED light bar will give you the extra power you need to stand out from the crowd and be instantly noticed. The lights also go a lot further than the ones found in a mini LED light bar, meaning they can be seen all around with no chance of there being any blind spots or anyone missing you.

This can be desirable if you’re a large vehicle that needs to be seen when driving through traffic-dense areas. It’s also a good idea if you frequently operate your emergency service vehicle at night where visibility is a lot lower, and it’s also perfect for adverse weather situations. They’re also waterproof like their mini counterparts, so you don’t need to worry about their permanent position on the roof of your emergency vehicle.

In short, full size LED light bars aren’t really targeted at part-time emergency service operatives or those that use undercover vehicles. Instead, they’re targeted at people who own vehicles that are used solely for emergency purposes, for services that require a strobe light bar that flashes to draw attention. While it’s not impossible to remove them after installation, it’s impractical to continuously spend time on removing and installing them.

What it ultimately boils down to is if you need the flexibility of having a magnet mounting system. Are you interested in removing the LED light bar now and then, or would you prefer to have the LED lights permanently affixed to your vehicle with the included mounts? This will be the main consideration that drives your purchase decision.

The secondary consideration would be how bright you need the lights to be. As the magnetic options are typically smaller, they aren’t as bright as larger alternatives such as the Mirage 48. However, that’s not to say that the smaller magnetic versions aren’t bright. Our mini LED light bars can go up to 29 LED lights while still being magnetically mounted, making it the best of both worlds. ETD has more than one LED light bar for sale, just browse and see what we have to offer!