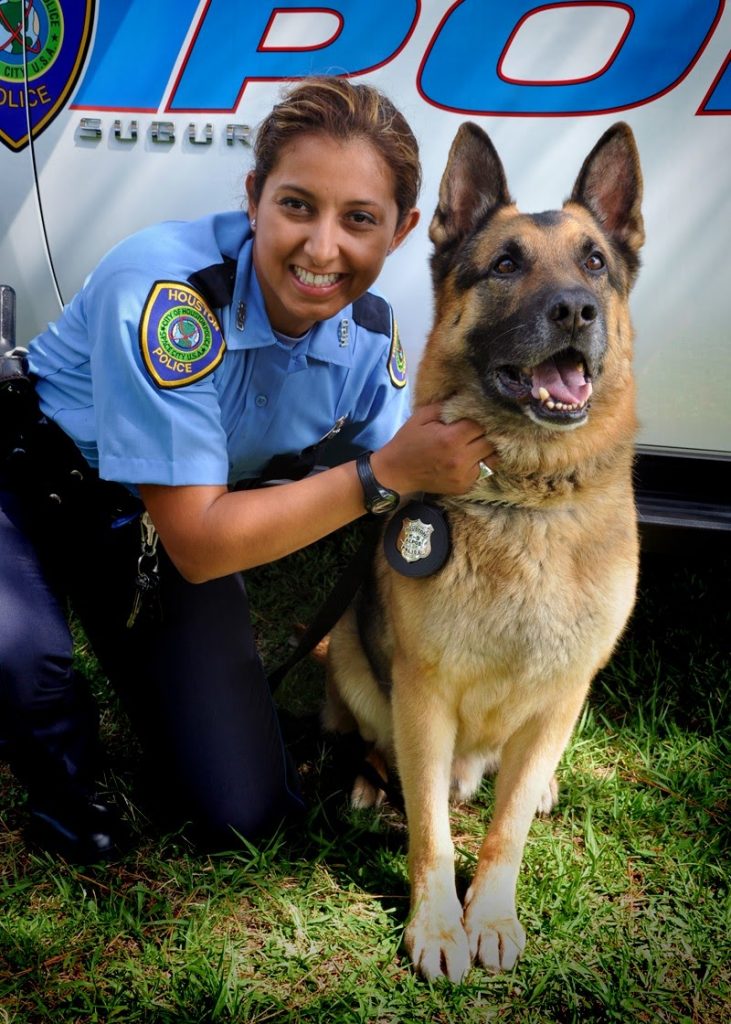 Police K9 Officers and their partners are unique law enforcement units that perform services that no other police teams provide. Handlers welcome their dogs into their homes where they become part of the family. Throughout the various stages of police dog training, dog and officer form a close bond that in most cases lasts a lifetime. Dogs, however, are more than pets, for they spend each day, and many a night, away from their home becoming acclimated, first, to the law enforcement environment, and later as they mature, training for and mastering very specific skills. Both handlers and animals undergo vigorous initial training for about a year.

Law enforcement agencies acquire dogs in various ways and at different ages, some even breed their own. Dogs often become ‘ officers’ and through the years, just as their human partners, continue training. They compete in trials, are distinguished for excellence, and are awarded certificates for outstanding performance. Throughout their careers the police canine officer and the dog work together ‘to catch the bad guys’, to locate illegal or dangerous substances, and to track down a person both living or dead, all the while maintaining their own very close relationship.

Which Officers are chosen...and Why?

K9 officer assignments are coveted positions and few in number in law enforcement agencies, but just because a person likes animals doesn’t mean he/she will be paired up with a ‘ fuzzy’ partner, for there is usually fierce competition. A potential handler usually has, at a minimum, 2 to 3 years of experience on the force to gain valuable experience in numerous areas. Having an associate’s or bachelor’s degree in police areas also helps single out an applicant for this competitive posting.

Not only is it essential to like dogs, but it’s best that applicants have had some previous serious training experience with animals, so the officer knows that forming a good relationship with a dog takes a lot of time and ‘pure’ dedication. They should be able to understand and communicate professionally and effectively with their dogs.

Being an outgoing person is also crucial when considering a K9 position because officers should be approachable and personable.

When the public sees a police officer with a dog or on horseback, they tend to gravitate towards the animals and want to pet them or have their pictures taken with them. Officers and animals receive a lot of attention and interest from those around; therefore, officers must be able to handle the public’s enthusiasm. The animals are well trained before going on duty; people are not, so officers must be prepared to deal with a wide range of antics, and have the personality to do so.

A K9 officer’s responsibilities are NOT only those of a general police officer once he/she is assigned to a K9 unit; an officer is expected to train with the dog in order to master the additional handling skills needed when the dog is involved in search and rescue, tracking, apprehension of suspects, and recovery. When your partner is a dog, there are a lot of additional responsibilities because the dog goes home with you, and it’s a 24/7 commitment. 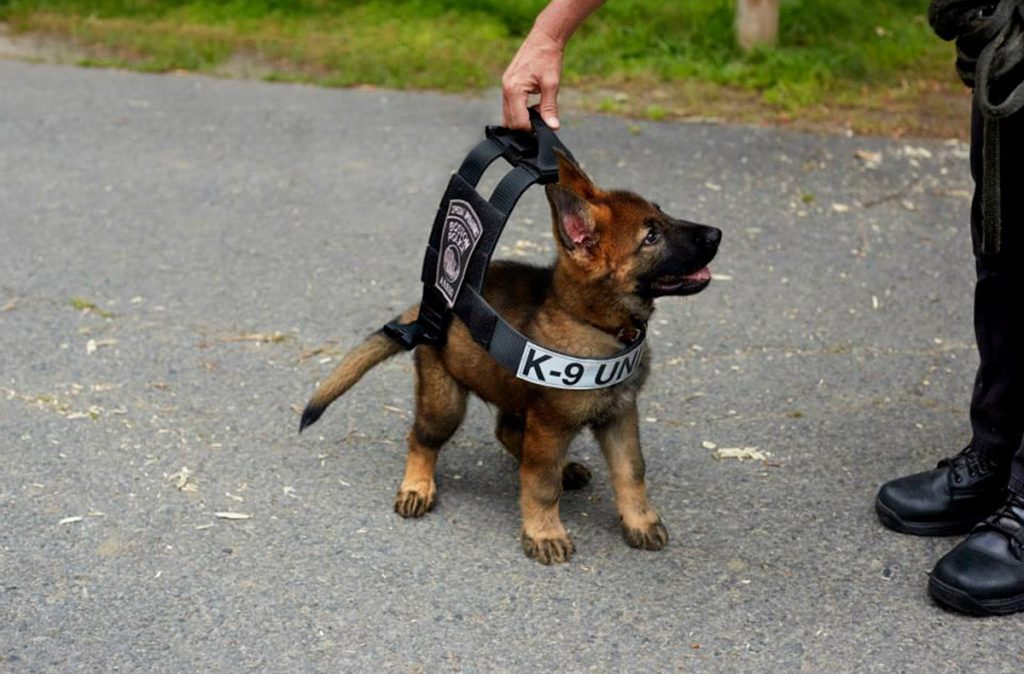 Not only do K9 officers have to train with their dogs, they also have to care for them spending many more hours with them than they would with a ‘normal’ family pet. There are two types of training philosophies, originally police dogs were trained to be paranoid of all people, viscous, and attack dogs. Today training has changed; departments want well-socialized dogs that meet and greet the public in a friendly, non-intimidating way.

That means a lot of time must be spent with puppies, and young dogs, taking them places, outside of the daily work routine. Officers realize that going to malls, for long walks in parks and around neighborhoods are necessary if a dog is ‘easy’ around people; family members, too, understand that there is an additional time commitment for a family, police dog.

Police Dogs and Their Families

All the dog's needs are met by their families, from grooming to going to the vet. There are also some specific guidelines set down by the K9 Unit that the handler and the family must follow, regarding the dog’s space and shelter. Once family members understand the role they will play in the police dog’s life, they are usually more than willing to do their parts in raising their new ‘ family’ member, but even then, they could be facing heartache. 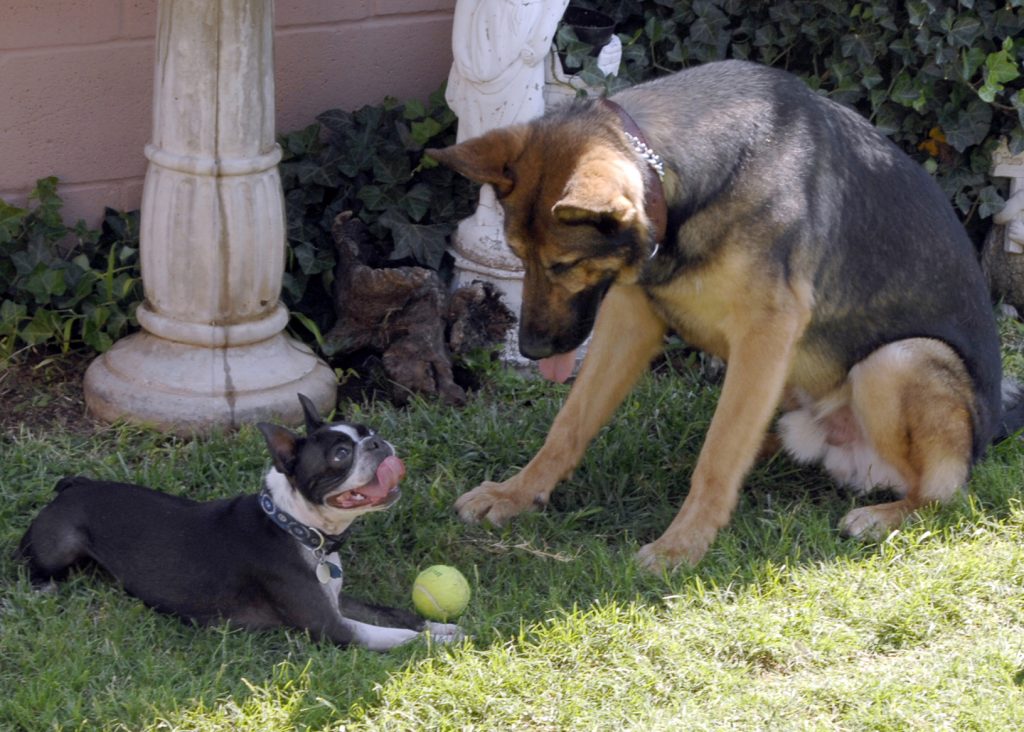 Police dogs face the same risks as their human counterparts, so families will not only worry about a parent who is a police officer, but they will also worry about the safety of ‘ their’ police dog. A dog will most likely become a loved part of the family unit, but family members must be prepared for the likelihood of the unexpected death of their police dog. Police canines are sometimes hurt or killed in the line of duty, which can cause great emotional stress for all who formed a bond with it.

It takes a lot of people to produce a well-rounded, well-trained law enforcement dog, and family members are considered trainers, too. They must be fully prepared to not only welcome the dog into their home, but to realize that the dog is on call 24/7 the same as its handler. Another factor to be considered is the handlers’ living arrangements; they must be approved by the department, and if an officer is renting, permission to house a police dog must be granted by the landlord. 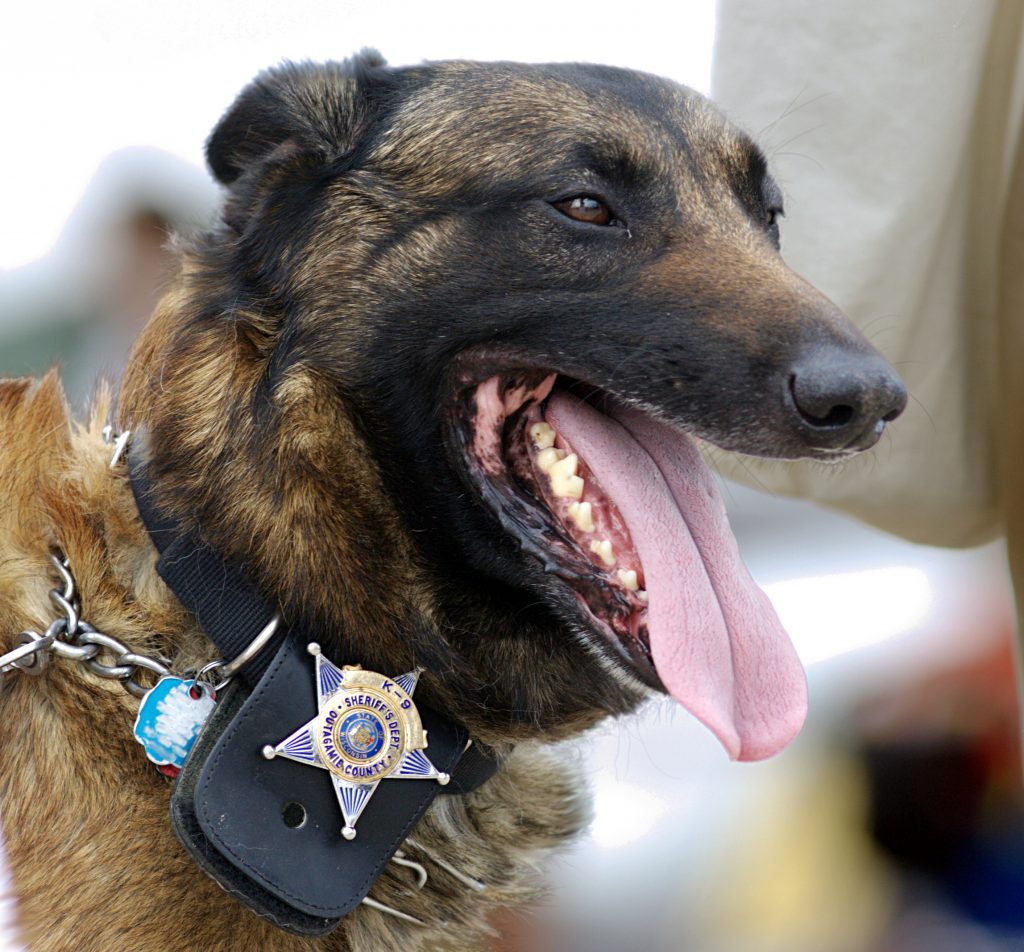 Law enforcement can generally use any type of dog that is good at hunting and retrieving and has a distinct ability to detect scents. Most dogs with these attributes become good police dogs with the proper training, but even with careful screening, there is no guarantee. Of course, the most recognized police dogs are German Shepherds which are highly intelligent and have a strong ‘ guard’ instinct. Because there is often a shortage of suitable dogs to train, the Winnipeg Police Service has developed a breeding program in order to always have the best dogs for their force. They have chosen for their own police dogs the Belgian Malinois.

Upon completion of their initial training, some departments swear in a dog, give them a badge, and an ID number. When working dogs die in the line of duty, they are remembered as officers in the K9 Section of Officer Down Memorial Page and in other organizations around the U.S. like the American Police Hall of Fame Canine ( K9) Memorial. Many communities remember the K9 Officers who served and protected them by erecting plaques, stone monuments, and statues in their parks or in town squares. 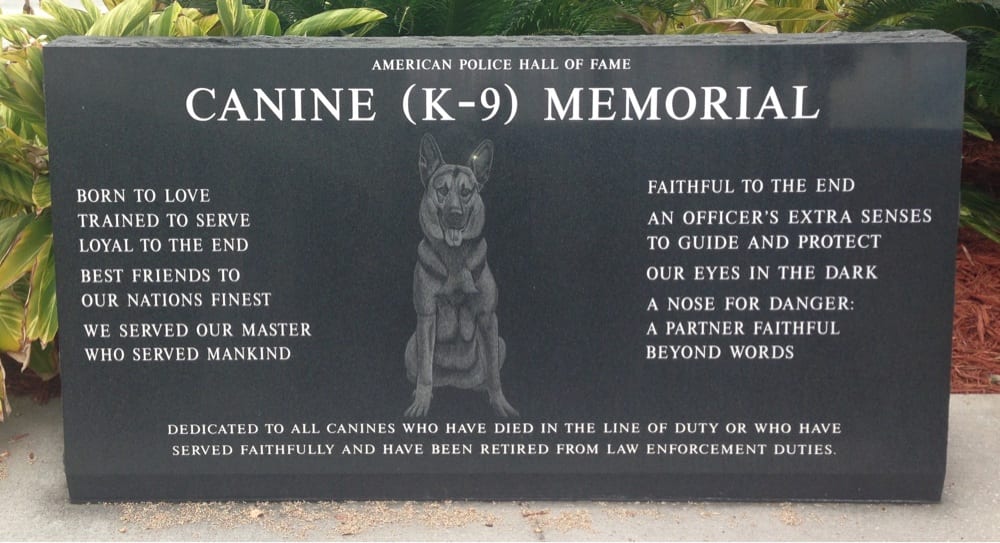 The training initially focuses on dog obedience, which in most cases begins before puppies are placed with their fellow officers. These activities are usually catch and release and tugging games; then the training is continued at ‘their new homes.’ Older puppies and young police dogs accompany their human partners when they are on duty responding to assistance calls or emergencies, so they can hear sirens and see bright flashing emergency lights, and be in chaotic surroundings. They tend to spend much of their time, however, in their carrier cages on the back seats of squad cars while they are getting ‘ used to’ the the surroundings they will eventually be working in.

Many police agencies buy puppies and young dogs that show some degree of these characteristics at an early age which will hopefully equate into highly skilled police dogs, but often it is a ‘hit or miss’ selection, and there are not always ‘high quality’ dogs available.

Dogs are trained in three general categories which includes additional high specialization training under each: detector dogs, ‘find and bite’ dogs, and tracking dogs. Detector dogs search for and locate illegal substances, such as narcotics or explosives. They can also be trained to detect gases that are byproducts associated with criminal activities. “ Find and bite" dogs do exactly that; they find a suspect, grab on and won’t let go! Scent specialty dogs are used in search and rescue and for missing persons such as the elderly who have wandered off. They track the scents of evidence or of individuals. These dogs are usually trained in one particular area – such as missing person or cadaver search – and focus on that area for their careers.

Officers Mazur, Rydz, Combs, and Gretz all relate the same behavior patterns of their K9 partners. Their dogs are aggressive, high-energy dogs when on the job, vigilant, responding immediately to any command. At home, they are ‘big play toys.’ They are completely different dogs.

According to the Criminal Justice Institute: “ A K9 police officer’s salary will be commensurate with that officer’s time in grade and service. The US Bureau of Labor Statistics reports that police officers and detectives earn a median salary of $60,270 per year, and employment growth for these professionals is expected to be 4% through 2024.”

United States Police Canine Association - The USPCA is the oldest and largest police canine association in the world. It’s open to active full-time (paid) law enforcement at all levels who are canine handlers, trainers, or administrators, including Military Police. It is a well respected authority in the managing, testing, and certifying of police dogs. 48 Supreme and Federal District Court rulings have recognized the USPCA tests as a bona-fide way to evaluate police dogs. This organization has created 9 certification rulebooks to download and study if a handler wants to certify his/her police dog in a certain area. Some are tracking, patrol, and detection of narcotics, explosives, and cadavers. Specific events and competitions that end with awards and certifications are held around the United States all year long. Check USPCA for specific events, times, and places. 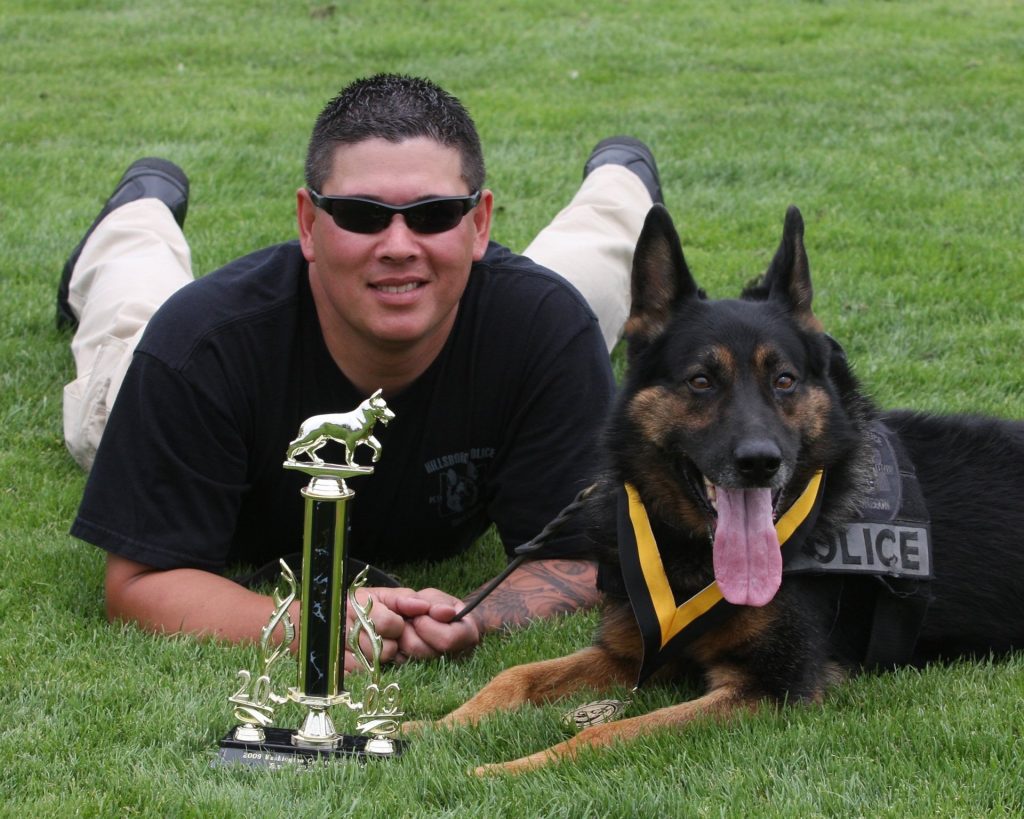 National Police Canine Association NPCA is a non-profit nationally accredited association dedicated to the training, development, and certification of law enforcement canine teams and their administrations which sets realistic, attainable goals for working dogs and their handlers. It strives to be the best resource for professional canine units across the United States and Internationally by providing numerous regional and national canine training seminars. Their trainers, Instructors, a Standards Committee and Board of Directors have vast canine experience in all canine related aspects. The association offers street-realistic certifications in Patrol, Detection and Tracking and Trailing. 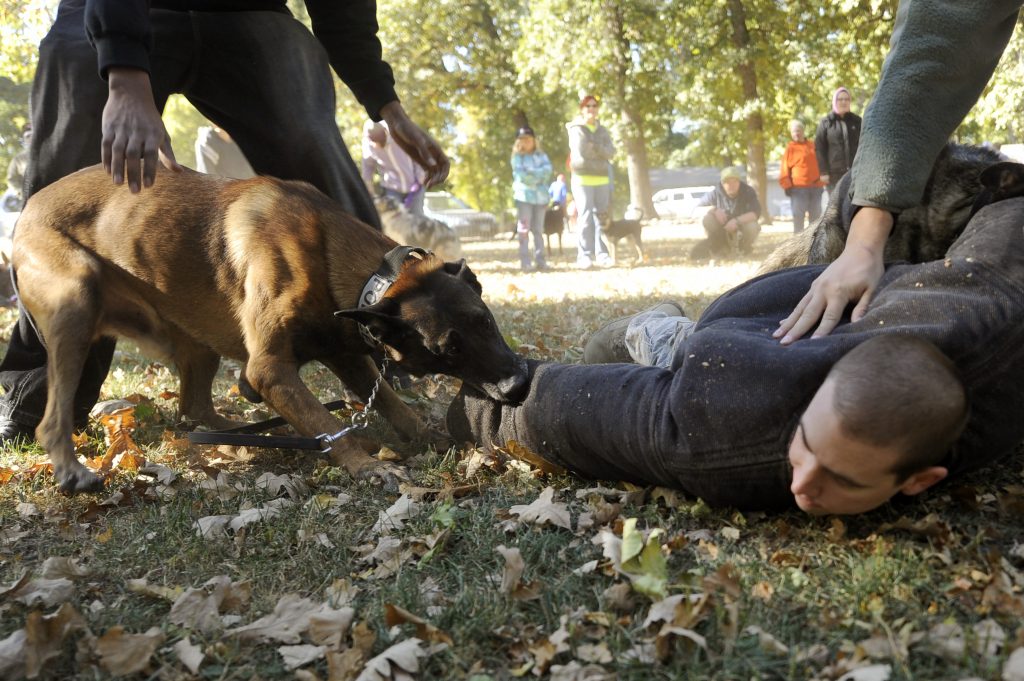 K9 officers can save the lives of police officers because they are fast, effective ways to stop a fugitive. Searching for a person buried under rubble is much more successful with K9 help. Highly trained dogs can ‘ sniff out’ well-hidden illegal substances that would go undetected by a human. All-in-all police departments can do much better policing when they have a highly functional K9 unit because it give officers much more flexibility when dealing with difficult situations.

Dogs have long been considered as man’s best friend, but a good police dog is a criminal’s worst enemy!