Along with sirens, LED police lights are in invaluable tool in the arsenal of the police officer. They enable emergency responders to arrive at a scene quickly, warn other drivers of their arrival, and they serve a host of other purposes too. The actual color of lights used by police does depend on the state, as well as the type of vehicle deployed, but they all serve a functional purpose. But, what about the white light? What is its purpose, and what should you do when you see any of the tactical lights used by police on public highways?

Generally speaking, a police LED light bar has two colours, red and blue. Red, which is a color typically used to depict danger, means that there is an immediate emergency and that the car is responding to that emergency. The blue light is used to warn of a police presence and is chosen because the hue can be seen over a very long distance. Often a police light bar will use an amber light bar on the rear of the vehicle to provide directional assistance.

Most police cars also have a white light, similar to a large spotlight. This is not usually used to warn of a police presence but is, instead, used to light areas or to light up people or vehicles. It is used as a means of illumination, rather than as a tactical light. Yellow lights are also sometimes used, to warn other cars that a squad car needs to slow down or stop. 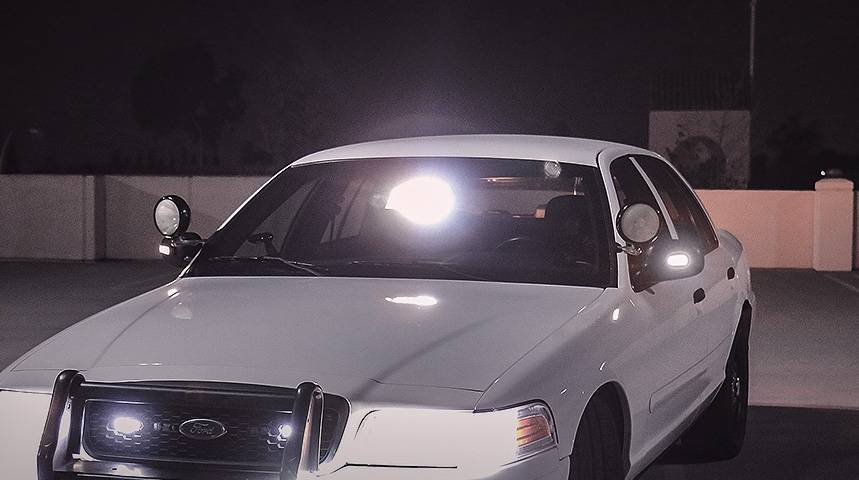 LED strobe lights are used by police to warn of their presence, and to alert other road users that they are approaching at speed. They can be used to warn of a potential danger, for example if a car is broken down or has been pulled over at the side of the road.

Without the presence of the strobe lights, cars that have been pulled over in the dark would be difficult to spot by other road users and could potentially cause accidents. During police chases, the LED emergency vehicle lights are used to warn others to stay out of the way, and the lights might be used to warn of the presence of the car itself – for example, if a police car has to stop in a hazardous position, they will usually operate the strobe lights in order to warn other drivers that the car is there.

Other Types Of Police Light

There are other types of light used by police. An LED light bar inside the car might be used by undercover or plain clothes police. These are difficult to spot in an unmarked vehicle, and they allow the police to remain invisible until required.

Small portable and rotating lights serve a similar purpose and are usually placed on the dashboard before the car sets off. Another spotlight may be positioned near the door window, which officers can use to illuminate a scene, vehicle, or pedestrian, especially at night when lighting levels are low.

The aim of LED strobe lights is to alert people to the presence of police. In most cases, this is done so that other road users are aware of the hazard that they pose. The sudden appearance of these lights can be alarming, but they do serve a genuine purpose. Generally, it is the responsibility of the police to avoid other traffic, but it is also the responsibility of drivers to move over to the right hand side of the road in order to let the police and other emergency vehicles pass.

If a driver sees police strobe lights approaching a junction, they should wait before entering the junction. Police lights can also be used as a means of pulling drivers over, and if a driver sees a lit up police car in their mirror, they should pull over for questioning.

There are laws governing the use of police strobe lights, including their use by undercover police. Officers should only use their strobe lights in an emergency or to warn of potential hazards. The exact laws that officers have to follow, pertaining to the use of their emergency lights, differ from state to state.

However, it is generally the case that all drivers should pull over to the side of the road, if it is safe to do so, in order to let the police pass. If you see a white flashing light, the police may be using it as a warning but are more likely to be trying to identify a particular vehicle or to illuminate your vehicle or one in your vicinity, and you do not need to stop or pull over unless they use their tactical blue and red lights. Check out all our categories to find police light bars for sale.