Police vehicles have undergone many changes over the years. The very first vehicle was highly impractical, barely able to give chase and often falling behind! However, since then, cars have been increasingly specialized for police use, from the addition of police markings and reflective panels right through to the mounted lights and sirens.

Over time, many features of police vehicles have been standardized across all the states and, while emergency vehicle lights vary in pattern, they are almost always red and blue. We’re all familiar with the flash of police lights as they whizz by but how many times have you wondered why those lights are blue and not been given a persuasive answer?

There are a few reasons for this - some reasons have been guessed, some are very practical theories. While we may not know the exact answer, or ever find it out, these theories do go some way into explaining why police lights haven’t changed in a very long time.

So, here are a few theories to consider.

Why Do Police Vehicles Use Lights At All?

The main reason that police vehicles use lights is to draw attention and to show where an oncoming vehicle is arriving from. While a siren may initially command the attention of people nearby, the sound is often refracted by surrounding buildings, making it difficult to work out where the vehicle is and how quickly it is moving.

Adding police lights to vehicles means that people can see as well as hear where a vehicle is coming from. This means that the vast majority of people will be alerted to the presence of an emergency vehicle in some way. With technology these days, everything from roof mounted light bars, to visor light bars, are easily visible when flashing.

Police cars use lights in a variety of different ways. Some patterns of flashes may be used to warn traffic that a car is approaching, particularly when nearing a junction. Other patterns may be used to indicate a parked police car at a crime scene and there is a theory that some patterns and colors are used specifically to attract the attention of other officers. 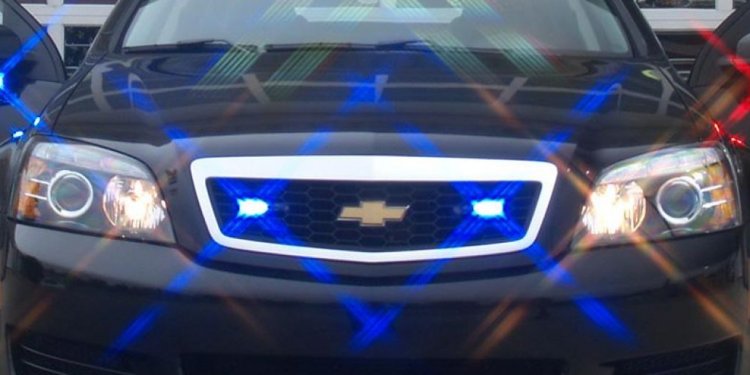 To begin with, the police car light bars were not colored but were simple white spotlights. While these lights were ideal for lighting the area ahead, they didn’t do much to draw attention. The other problem was that these lights required a lot of battery power. It wasn’t until this problem was solved that lights were developed any further.

Strobing red lights were introduced in the 1930s and by the 1940s, most police cars traveled with a single beacon. The reason for the red beacon seems to be that most people associate the color red with danger and the instruction to stop. Across the country, all red signs indicate danger ahead a flashing red light is difficult to ignore and so most people would take heed of a passing police vehicle.

But this doesn’t quite explain how blue lights were added into the mix.

It’s difficult to identify the moment when blue lights were included on the light bar but it’s likely to be somewhere around the 1960s when the single red globe light was replaced with roof lights. Since that point, all police lights have included red and blue and many also incorporate white lights, which are used by stationary vehicles to warn other police cars to slow down.

What is clear is that given red and blue lights have long been associated with the police and other emergency services, it would be illogical to change these colors now. If police were to change their colors at this point, confusion would almost definitely ensue.

One of the most compelling reasons that a police led light bar is red and blue is that this makes them easily identifiable as emergency vehicles. However, it seems that there is some variance on the usage and regulation for using lights of this kind between states.

One of the reasons that red lights tend to be preferred is that the longer light wave travels through fog and is easier to see during the day. However, blue light travels further, especially in the dark, so it makes sense to use both lights in tandem. No matter what time of the day the police vehicle is traveling, it should be visible from some distance.

Another theory is that a red light shows that the police vehicle is responding to an emergency whereas the blue light is designed to catch the attention of other officers in the area. It’s not totally clear whether this is true, or if it is true in all states.

Another good reason to include blue lights on police cars is that there aren’t many vehicles on the road using this color. Red lights, on the other hand, are pretty much everywhere from tail lights to stoplights. On this basis, it makes sense to include another less common light as a red light could easily get lost in the crowd, even if it is flashing.

In an emergency, there is no time for other road-users to be wondering whether they should move aside for a police vehicle or not. They need to know instantly that there is an emergency. While sirens can attract attention, lights are much better at indicating where the emergency is coming from.

Perhaps the most interesting theory about the combination of blue and red is that it can avoid issues with color-blindness. People who cannot see the red spectrum rarely have problems seeing blue lights and vice versa. By putting both lights on, everyone should be able to identify police cars by the color they can see.

Once again, it helps that police cars also have different patterns of flashing lights so that if there is a problem with the color, they still attract attention.

Police lights have come a long way since the first spotlight was added to a vehicle, and now the led strobe light bar is king and whatever the reason for their choice of red and blue, there’s no doubt that these colors certainly work! Check out the rest of the site if you are looking for an led light bar for sale. Keep reading by following the links below to learn about our police siren and other emergency products.