The fact that police lights are red and blue is something that most of us just accept. We’re so used to a red led light bar and blue led light bar being chosen, we don’t pause to think about why those two colors particularly — from a huge spectrum of visible light — are used to identify police warning and emergency lights, along with the ever popular amber led light bar.

Of course, now that this has been posed to you, you’re probably immediately wondering why exactly red and blue were at the front of the queue when it come to choosing police lights. If you’re curious to find out the answer, read on! 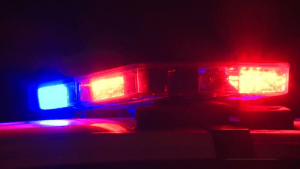 We all associate colors with certain things, even if we don’t know that we’re doing it. Color theory is an area of science that seeks to understand how colors can be used to control mood, impact our decision-making process, and provide information to us.

You can see color theory at work in all aspects of life. Even something as simple of the design for product labels is impacted by color theory, so it should come as no surprise that color theory was also applied when it came to choosing the color of police lights.

In nature, red is a warning color. As a result of this, we’re all programmed to respond when we see red colors— that’s why stop signs are red, for example. Red is a color of alertness, of awareness, of paying attention and being cautious… which are exactly the things police cars want people to do when they see a police light.

Police lights and sirens, after all, are all about warnings. They’re about informing other road users of potential problems. Red is the natural choice for warning lights, because red is nature’s chosen warning color— all a police car light bar is doing is making use of a part of our brain that has long associated red with danger.

So that’s it, surely? Red is a color that we all respond to, a color that makes us cautious, so police lights make use of this known reality of color theory in order to alert the public of their presence. Question answered… right?

Not quite. There is a bit more behind police lighting and colors.

The trouble of brake lights

The impact that red has on the human brain cannot be underestimated; it’s used time and time again to try and provide warnings and alert us to possible danger. Unfortunately, his is something that all car manufacturers also understood… which is why brake lights are red, too.

It’s easy to understanding their thinking. As we’ve discussed, red is nature’s “stop” color; the color we’re all meant to pay attention to— and there are few circumstances on the road we need to pay attention to quite as much as instances when vehicle in front of us is braking. To catch the attention, brake lights are red in color.

This works well in and of itself, but poses issues when combined with the red of police lights. Two different functions — awareness of police vehicles and warnings about other vehicles braking — are essentially using the same tool to accomplish their goal. As a result, they are competing with one another for attention. Red is no longer the dominant, shocking color that it’s meant to be; it’s essentially become such a popular color to use to grab attention, it’s being used too much.

The answer to this problem has been addressed by police vehicles, who now commonly use a blue light bar as a replacement for — or in addition to — red lights. 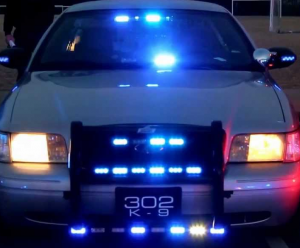 Blue is the chosen color for police lights as there are very few other blue lights in existence on the roads. Headlamps are yellow and white; brake lights are red— but blue is nowhere to be seen. As a result, blue is able to stand out, and provide the distinction that police vehicles require.

As a result of the brake light issue, red lights are often interspersed with blue lights on police vehicles. This helps to provide the “shock” of the red, but while still making the vehicle stand out amongst a sea of red brake lights, and consider that most civilians are not allowed to use police flashing lights, it makes a big difference.

The time of day

As well as providing a much-needed distinction from the brake lights, there is another reason why blue and red lights work well together for police vehicles. It has been theorized that red lights are easier to see during the day, while blue lights are more likely to be visible at night.

According to this theory, blue and red flashing lights are therefore adaptable, and will be able to warn road users and pedestrians of a police vehicle’s presence regardless of the time of day.

Visibility for the colorblind

There is another theory as to why blue lights have proven to be the dominant color for police lights in the US, and this time, color theory isn’t the reasoning. It has been suggested that individuals with color blindness are usually able to see red or blue; they may miss one of these two colors, but rarely does color blindness impact the ability to see both, thus the reason you see both on an led light bar.

A thought on flashing lights

As you are likely aware, it’s not just the color of light that police vehicles use to signify their presence— the lights also flash. An led strobe light bar is a powerful way to get some attention!

The reason for this is visibility, and because flashing police lights tend to be harder to ignore. Imagine that you’re trying to sleep at night, and there’s a light outside your window that is just a steady beam. It’d be annoying, but you could probably cope with it. However, if that emergency vehicle light was flashing, you’d likely find it much harder to ignore.

It is worth noting that the exact color of police lights tends to vary by state, but for the most part, red and blue are the norm. As outlined above, red and blue flashing lights, when used with a cop siren have a number of benefits that help to alert other road users of the presence of a police vehicle, which in turn makes the roads safer for everyone else to use.

Surface Mount Lights are getting slimmer and brighter