Every time we post a customer POV demo video on social media, there are a ton of comments. What we’ve learned from these posts is that there are usually three different types of comments. Those that love to see POVs lit up with as many emergency vehicle lights as possible, those that think the person that created the video is a “whacker,” and those that think warning lights and sirens don’t belong on personal vehicles at all.

At times, these discussions blow up into debates and even arguments about what is appropriate and what isn’t. Police officers, volunteer firefighters, tow truck drivers, and those that don’t work in first responder fields have opinions about people who use the same lights and sirens as department vehicles on their POVs. With the regular occurrence of these debates, we decided to try and find out how many lights are too many for a POV?

Is There a Thing as Too Many Emergency Lights on a POV?

People who are against the use of lights on POVs often argue that too many lights are more of a nuisance than a benefit. So, it leaves us wondering, is there a thing as too many lights? Maybe…maybe not. It doesn’t seem like there is a black and white answer to this question. Instead, you have to think about why a person is using lights and what types of lights they are using.

The Purpose of Lights on a POV 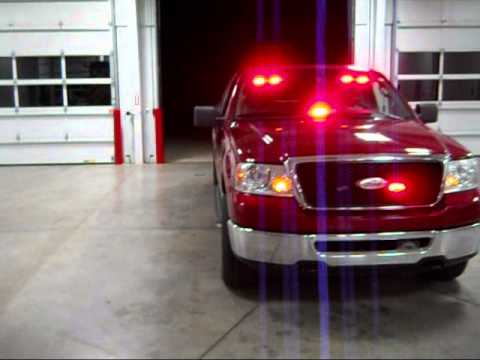 Just like the lights and sirens on a fire or police vehicle; lights and sirens on a POV have a particular purpose. First and foremost, emergency lights are used to get the attention of everyone around them. Once a vehicle has the attention of drivers, the warning equipment allows them to attempt to gain the right of way, which allows them to get where they are needed faster.

When stationary, a POV or first responder vehicle uses lights as warnings to drivers and pedestrians in an area. The warning lights convey a message of danger to anyone that nears them. It’s also an easy way for a first responder to say “I’m working, please don’t hit me or my apparatus.” Check out our section about warning light colors including the blue led light bar, yellow light bar, or amber led light bar.

The Need for Warning Lights is Clear – So Why Do People Argue About Lights on POVs?

Now that you know why first responders use emergency lights such as blue visor lights on POVs and department vehicles, you’re probably wondering why people debate about this topic so fiercely. I’ll tell you why. It’s because there is always one person that finds a loophole in the system and goes haywire with equipment. You know the saying “just because it fits doesn’t mean you should wear it.” Well, that theory applies to lights and POVs as well.

Whackers Ruin it for Everyone

By now, you know what we are going to say. There is a particular type of first responder that ruins veterans’ opinions about anyone using lights on their POV. This kind of person is fondly referred to as a whacker.

We bet that you can go to any fire department, police meeting, or tow truck convention and quickly pick out a whacker. There easy to spot and are secretly laughed at by their brothers and sisters. The worst whacker POVs have more lights than a fire truck decked out in decorations in a Christmas parade. The excessive use of lights is what ruins people’s opinions of lighting permissions on POVs.

Whether a person is a whacker or not isn’t the only reason many first responders don’t think a person should use lights and sirens on their POVs. Another strong argument is reckless and dangerous behavior that is often associated with those that use emergency equipment on personal operating vehicles. It’s not to say that everyone that uses this gear on their POVs is reckless and dangerous. However, it’s the opinion of many that first responders have a tendency to lose all common sense on the road when they’re Mitsubishi Lancer is equipped with as many warning lights as the town’s ladder truck.

Lights are Meant to Convey a Message – Not Create Confusion

What we’ve learned from our customers regarding how many lights is too many on a POV is that it isn’t a question of how many lights you have or don’t have – it’s how you use them. Instead of mounting as many lights in as many locations as possible, it’s important to create a well-balanced light set-up. A well thought out POV light set-up that includes a warning light bar and other lighting conveys a message and should never create confusion on the road.

There are many ways to create a set-up that allows a first responder to get to the station faster and create a message of warning when needed without overdoing it and risk being labeled the department’s whacker. To do this, you need to think about how and why you use your POV in the field.

If you just want to get to the station faster, a magnetic mini light bar or dash light will probably do the trick. As an option, you can install a dual color traffic advisor or deck and dash interior lights to help you get attention and the right of way on the road.

When it comes to warning lights, you can opt to use the same lights as you do when in route to the station, but there are better options. Hideaway strobes, surface mount lights, and traffic advisors are all better warning light options. You can get warning lights in code colors or split combo amber/white or all white or all amber light bar. By installing both types of lights on your vehicle, you can feed your need for as many lights as possible and also be visible in any situation on the road. This my friend is how you create a well-balanced, totally legit POV lighting set-up.

As always, it’s important to check your local state statutes before ordering or installing any equipment for your POV. Laws vary widely from state to state regarding the type and color lights a first responder can use in the field. These rules apply to all department vehicles, and some states have even stricter laws when it comes to POV light use.

Take our advice and get all the lights you want and need without becoming a whacker by ensuring every light you install has a particular purpose. If you can see your bright red Ford truck from outer space when it’s lit up because of your massive emergency light bar for trucks, you may have too many. Otherwise, when you keep what we have explained above in your mind while shopping, you should be brighter and safer as a result.