There are many things that go into police work, but one of the more important aspects that is typically overlooked is the use of lights such as the police light bar. After all, just think about all the things that police -- and other emergency services -- would be unable to do if they didn’t have lights on their vehicle. On this page, we’re going to run you through all that you need to know about cop lights, the different kinds that are available. We’ll also take a look at how pedestrians should interact with cop lights, including buying them for their own personal use and what they should do when they see them.

Police Lights Are Used To Respond Quickly To an Incident

The police can only do their job if they’re able to respond to incidents in a timely manner. No matter where they may be, when they get the call that their services are needed, it’s important that they can get to the scene of the incident as quickly as possible. Of course, traffic can sometimes make this difficult. It’s not often that the roads are empty, and at some points during the day, they can be jam packed with civilians going to and from work and other places. At this point, the police need to have a method for parting the traffic and moving as fast as they can.

This is where their lights come into play. Bright, multicolored lights can signal to other drivers on the road that the police are responding to an emergency and should pull over. Everyone’s familiar with the red and blue lights that the police have on the top of their vehicles. Whether they see the lights in the rearview mirror or at an intersection, they know that they should slow down and move to the side (if required) so that the police are able to move past without delay.

They’re Also Used To Flag Down Other Cars

Police cars don’t just respond to incidents. Sometimes, they’re just out on patrol, making sure that everything’s safe. However, if they see something that doesn’t look quite right or which requires attention, they have to find a way to get the attention of the people they want to speak to. In this case, they’ll turn on the lights and often turn on their sirens too, until the person that they want to speak to has noticed and pulled over. If the person is a pedestrian, they’ll put the police car light bar on so that they’re able to make sudden moves (such as turning around) without causing any danger to other drivers. The lights function as an instantly recognizable symbol that people should pay attention and take action, be it paying extra attention to the actions of the police car or safely pulling over to the side of the road.

You’ll also find that police cars sometimes have their police lights on even when they’re not moving. This is to warn other drivers and pedestrians of an incident. Sometimes, you’ll find that there are multiple police vehicles in one area with their lights on; this is to tell the public that a police matter is in progress and that they should avoid the area or pass in their vehicle safely.

Most emergency vehicle lights sit on top of the vehicle. They’re always visible, even if they’re not necessarily turned on. But sometimes, a police vehicle will have lights that aren’t visible until they’re switched on. This is the case with undercover cops, who have to move around discreetly but which also need to sometimes move quickly through traffic or get the attention of pedestrians. This type of police work requires LED lights such as a visor light bar, which can be placed in the car until they’re needed. When they do need to be used, they’re simply plugged into the cigarette power outlet in the vehicle and placed on the interior of the car. They can be up and running in seconds, and also removed in a similar amount of time. 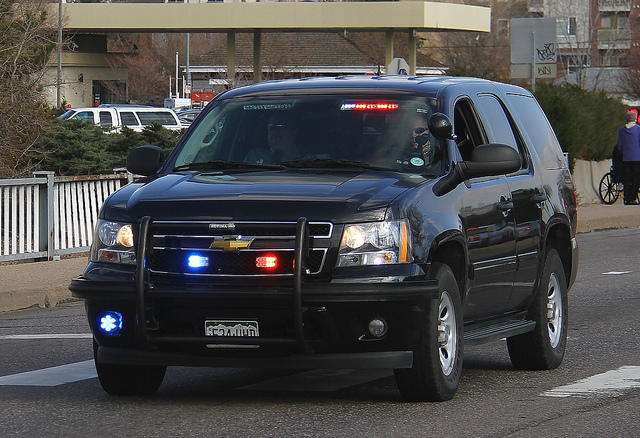 The police car is the most common type of law enforcement vehicle. While they can come in different shapes and sizes, they generally follow the same style and form. These types of vehicles typically have police LED light bars on top of their vehicle, since the lights are always being used and this type of light offers the best power and durability.

You might think that undercover cops wouldn’t need lights on their vehicle, since they are, well, supposed to operate under the radar. While this is true for 90% of their time on the road, there is also the 10% of time when they have to respond to nearby crimes or when they need to get the attention of passing vehicles. These types of cars use LED police visor lights, which can be easily installed and turned on as and when they’re needed.

You see more police motorcycles in some areas than others, but there’s no denying the importance they play to the police force. They’re able to quickly get to spaces where larger vehicles can’t access and are typically used for patrolling busy areas in cities. They have LED lights attached to the side so that they are more visible to pedestrians, especially since motorcycles are inherently more dangerous than cars and SUVs. It’s important they’re seen.

For your own vehicle

When we talk about police lights, we usually only talk about how the police force uses them. However, it is possible for civilians to buy cop lights for their vehicles, even if they’re not connected with law enforcement. There are any number of reasons why someone might want to install these types of lights on their private vehicle, but is it legal? Well, it depends. First and foremost, it’s generally not illegal to buy police lights. Anyone can own them. The difficulty is figuring out whether a person can put them on top of their car. The legality of this varies from state to state, so it’s best to talk with a legal expert in your state if you’re thinking about putting them on your vehicle.

The legal aspect only comes into play when we’re talking about public roads. If you’re operating the vehicle on private property, then it’s usually fine to do so, though it’s best to check first. An example of when this might be required is when we’re talking about protecting private land. You might have a vehicle with police lighting patrolling the area, as a way to warn people that the area is patrolled and to deter people from trespassing. Police lighting is also popular in some other industries, like farming for example. This is because the machinery involved in farming processes can be dangerous to people, and so lighting is an effective way to warn them that they’re there.

What Should Pedestrians Do When They See Cop Lights?

While cop lights are useful for getting people’s attention, they’ll only be truly effective if the public knows what to do when they see them. How you should respond depends on the circumstances. If you’re driving your vehicle and see the red and blue led light bar lights in your rearview mirror and hear a police siren, then you should move over so that the car can pass. If the vehicle stays behind you, then it’ll likely mean that they want to talk to you, at which case you should pull over to the side of the road when it’s safe to do so. If you’re walking and you see police lights, you don’t generally need to do anything, other than to consider changing the route of your walk if it seems as if the police need space to do their work. It’s also important to be aware that the absence of a police car siren doesn’t mean that the situation isn’t any less serious; in some cases, this may signal that the situation is even more serious (for example, the police may not sound their sirens when they’re responding to a bank robbery since this would alert the criminals). Always pay attention to the presence of lights, since they’ll always be on when the police (and other emergency vehicles) need to get somewhere in a hurry.

If you need to buy police lights, then Extreme Tactical Dynamics should be your first and only port of call. We are widely recognized as the leaders of the emergency vehicle lighting industry and have the experience and expertise needed to ensure that you end up with the lighting solutions that are perfect for your needs. We’ve been in business since 2005, and in the time that has passed have garnered many, many happy customers. Our products are high-quality and built to last, so you can have the peace of mind that the products you buy will stand the test of time and exceed your expectations. We’re able to meet any demands that you might have, so be sure to get in touch and check out our light bars for sale.