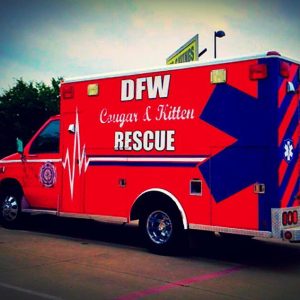 In 2012, a Fort Worth, Texas, business owner decked out a retired ambulance and began to use it as a for rent “party bus.” The former emergency vehicle boasted a stripper pole, full wet bar, and club-like neon lights. It was even called, the “Slambulance.” Paramedics, firefighters, and even the police took an interest in this vehicle and wanted it off the streets. But, in 2012, the business owner wasn’t doing anything illegal. Thanks to a new law that will change very soon.

One of the biggest issues Fort Worth first responders had with the Slambulance was that it looked like a legit ambulance. It even had “AMBULANCE” written across the front end and red and blue emergency lights installed on the rooftop. At first glance, the party bus appeared to be an emergency vehicle. The Slambulance was driven on city streets with no way to warn civilians that it wasn’t an actual ambulance.

As soon as Fort Worth police realized there was a retired ambulance decked out in legitimate gear, they begin to investigate. Many agreed the owner of the retired ambulance/party bus should be put out of business or even arrested. However; after a lengthy investigation, it was determined the new owner of the retired vehicle was not breaking any laws.

MedStar, a Fort Worth ambulance company, reached out to their state representative and begged for legislation that would make a vehicle like the Slambulance illegal. State Representative, Craig Goldman, took a particular interest in the situation and worked to sponsor legislation that supported the first responder's request to make vehicles that appear to be on-duty emergency vehicles illegal.

Rep. Goldman, his staff, and Medstar worked closely together to work on the language of the bill. Everyone involved wanted to make sure there were no loopholes that would allow a similar vehicle to make its way to the streets of Fort Worth again. The bill was introduced at a legislative session as House Bill 1249 (HB 1249). The newly introduced legislation passed the House and Senate quickly. Governor Abbot signed House Bill 1249 on May 30, 2017. It will take effect on September 30, 2017.

What Does House Bill 1249 Mean for Imposter Emergency Vehicle?

So, what does the passed legislation means? At the most basic level, the passing of HB 1249 makes imposter vehicles illegal. For the Slambulance, it means, its days on city streets are ending soon. Not only does the new legislation make it illegal for imposter vehicles to be driven on the streets in Fort Worth, but in the whole state of Texas too.

Every State has Different Laws Regarding Emergency Vehicles and Equipment

Every state has different laws relating to the use of emergency vehicles, equipment used by these cars, trucks, and rigs; especially when it comes to flashing lights. Although the emergency light state statutes vary greatly by location, it is always illegal for a person to impersonate a first responder, which depending on laws can include possessing, installing, or using emergency vehicle lights. These laws are enforced rigorously and can be applied at law enforcement’s discretion. Any civilian, volunteer, or other person considering installing any emergency light bar or other equipment on their vehicle, such as a police siren, whether it’s a retired fleet vehicle or personally owned, must follow the law in their state or face grave consequences including arrest.

The 10 Best Emergency Vehicle Parades in the United States